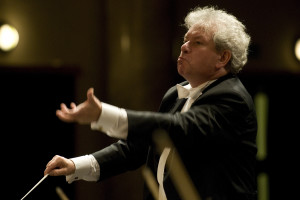 Jiří Bělohlávek is currently a leading figure among Czech conductors, and throughout the world his interpretational creations are regarded as representative of the qualities of performing art in the Czech Republic. Following his success at the Herbert von Karajan International Conducting Competition in 1971, Bělohlávek’s artistic career took off dramatically. For six years he conducted the State Philharmonic in Brno, accompanying the orchestra on several important concert tours that took him to Austria, Germany and the USA. In 1977 he began a twelve-year period as principal conductor of the Prague Symphony Orchestra, turning it into the world-class ensemble that it is today, taking the orchestra on concert tours throughout Europe, Japan, the USA and making a number of outstanding recordings.
Bělohlávek made regular guest appearances with the Czech Philharmonic from 1973, becoming a permanent conductor of the orchestra in 1981 and then, from 1990 to 1992, occupying the post of principal conductor, in which capacity he continue the work of his predecessors — particularly of Vaclav Talich and Vaclav Neumann — with much success.
Bělohlávek made his first appearance in Japan in 1974 and gave his first concert in the USA eight years later, and since that time he has been highly sought-after among the symphony orchestras of the world and has been a guest at the most prestigious music festivals. Since 1995 he has been principal guest conductor of the BBC Symphony Orchestra in London, of which he became Chief Conductor in 2006. It is no exaggeration to say that the BBC SO has reached its new heights under Jiří Bělohlávek and HM The Queen awarded him The Commander of the British Empire in 2012.
In recent times he has also been passing on his wealth of musical experience to future generations through his teaching work at the Academy of Performing Arts in Prague.
Jiří Bělohlávek also has to his name a very substantial discography and has been awarded a number of important prizes both in his home country and abroad. 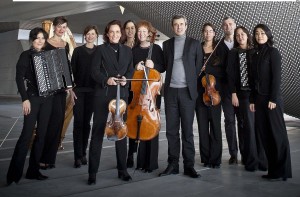 Founded in Paris in 1999, the Ensemble Calliopée is a flexible ensemble that can vary in size from two to twelve musicians who use their talents as both solo and chamber music artists under the artistic direction of Karine Lethiec. The Ensemble Calliopée devotes its work to finding new repertoires from the 19th century to contemporary compositions, alongside programmes of the major chamber works. Their fine artistic qualities and broad perspective facilitate inter-disciplinary projects in the spheres of visual arts, (Chagall exhibition at the Musée de Luxembourg, Paris), history (residence at the World War 1 Museum in Meaux) and science with renowned astrophysicist Hubert Reeves. Determined to reach out to groups traditionally considered as difficult to access or impervious to music, the ensemble has developed various programmes aimed at socially deprived youth, prisoners, and at persons with disabilities. The Ensemble Calliopée is often invited to perform at major concert halls (Théâtre des Champs-Elysées, Opéra de Paris, Salle Gaveau, Opéra Comique, Salle Cortot, Opéra de Rouen, the Parnassos Concert Hall in Athens…) and prestigious festivals (Festival Présences, Festival Pablo Casals, La Folle Journée de Nantes, Flâneries de Reims, Festival de Sceaux, Rotterdam Gergiev Festival…). Since 2011, the Ensemble has been in residence at the Musée de la Grande Guerre du Pays de Meaux, designing programmes of concerts and performances, as well as educational initiatives. Besides his work on Czech music, with two albums dedicated to Bohuslav Martinů (Alpha 2009, Salamandre 2015) and Krystof Maratka, the ensemble has recorded in march 2016 a CD of works by Rudi Stephan, Louis Verne and Lucien Durosoir (Éditions Hortus coll. WW1 Music), rewarded by “5 diapasons”. The Ensemble Calliopée is partnered by the Direction régionale des affaires culturelles d’Île-de-France (Ministry of Culture and Communications), SACEM, ADAMI, SPEDIDAM and Musique nouvelle en liberté. 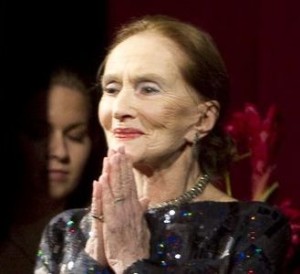 Soňa Červená is a distinguished figure of Czech musical culture, possesing an extremely singular voice and sense of dramatic expression. Her first permanent engagement was at the Janáček Opera in Brno. She continued her career at the Staatsoper in Berlin, where she was awarded the title of Kammersaengerin. She has been a guest of the opera houses in Vienna, Milan, Amsterdam, Barcelona, Brussels, Lisbon and in all the great German cities. She has also been invited to perform on the stage of the San Francisco Opera for 11 seasons, as well as participated on international festivals (Bayreuth, Salzburg, Edinburg, Glyndebourne). She has performed with such conducters as Rafael Kubelik, Herbert von Karajan, Karel Ančerl, Václav Neuman, Pierre Boulez, Sir Charles Mackerras… After concluding her career as an opera singer, she continued exploring drama at the well known Thalia Theater in Hamburg. She worked with the American stage director Rober Wilson on his creations. She was able to return to her native city Prague after the Velvet Revolution in the mid-nineties. For the National Theatre in Prague she created the symbolic character FATE in the Janáček opera of the same name, as well as the role of Elina Makropulos by Karel Čapek both directed by Robert Wilson. Her exceptional stage experience is also capitalised in the leading melodramas. She was awarded 2004 Thalia Award, 2011 Artis Bohemae, 2013 Gold medal in the arts by John F. Kennedy Center, Wahington, 2013 Czech state for merits in art, 2014 Silver medal by the Bohemian Heritage Fund.

Thanks to his dual training as musician and actor,  Vincent Figuri has been established for some years as a specialist in the role of recitation, particularly in the musical repertoire where « his voice makes one listen to the music ». His collaborations with Marek Janowski, Jiří Belohlávek, Mickaël Rudy, Calliopée and Carpe Diem ensembles, Noël Lee, Isabelle Moretti, Michel Dalberto, Pascal Amoyel or the Ysaÿe Quartet has been greeted by criticism who’s seeing in him “an artist worthy of the utmost praise”, being compared to the famous french actor Gérard Philipe.
Tireless discoverer, Vincent Figuri has been a producer on French radio France- Musique. As a teacher, he’s regularly asked to present young public concerts with the Orchestre de Paris, Orchestre National d’Île de France and the Orchestre National de France.
He also published a collection of poetries named L’ Offrande poétique and founded his own recording label, Salamandre, to promote original repertoire. His performances were awarded ****Classica, 5 Diapasons, ffff Télérama.

During the 2014/15 seasons, Romain will perform amongst other places at the Salle Pleyel (Paris, France) in the Haydn Concerto, with the National Orchestra of Ile de France and Enrique Mazzola, in the Tomasi Concerto, with Bertrand Chamayou in Shostakovich, with Arie Van Beek and the Auvergne Orchestra and will give recitals in Cincinnati, Salt Lake City and Boston in USA, at the Seoul Arts Center in Korea, in Germany, in Switzerland, in Spain, in Belgium, in Bulgaria and in Italy.